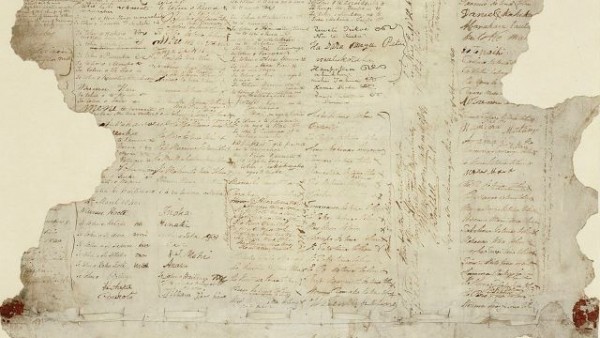 Here you will find a brief overview of what led to the signing of the Treaty of Waitangi, resources held at the Libraries and online resources if you would like to learn more.

The Declaration was drawn up by British Resident James Busby in 1835. It asserted the independence of New Zealand, with all sovereign power and authority resting with the hereditary chiefs and tribes.

Captain Hobson was appointed the British Crown’s Lieutenant Governor, tasked with negotiating a treaty with Maaori, allowing for New Zealand to become a British Colony. The English Treaty began to be drafted.

The English Treaty was added to by James Busby and then given to missionary Henry Williams and his son Edward to translate into Te Reo Maaori, over 1 night. The articles conveyed different messages.

The Maaori Treaty was presented and discussed with around 500 invited Maaori. No agreement was reached. The two treaties varied as the translations interpreted the three articles differently.

After more debate, 40 Maaori rangatira (chiefs) signed the Treaty. In the days and months following the official signing, approximately 8 copies of the Te Reo Maaori version of the Treaty were sent around New Zealand. Over 500 chiefs signed, however many also did not. All the copies were also signed by European witnesses.

Following the Native Lands Act 1865, the Native Land Court was established to convert traditional communal landholdings into titles, to make it easier for incoming settlers to purchase Maaori land.

In 1932, the Governor-General, Lord Bledisloe gifted the Treaty House and ground at Waitangi to the nation. It was hoped that it would become a national memorial. In February 1934, the first official commemoration was held at the Treaty grounds and the near by Te Tii marae. While many of the official messages were around partnership and uniting as one nation, the perception of the events both from the 1800s and the early 1900s was very different for Maaori and Pakeha.

The commemorations (at the time, called celebrations) gained momentum and the attendees grew each year. Following the Second World War a new flagpole was erected by the Navy, and during their national visit in December 1953 the Queen and the Duke of Edinburgh visited the Treaty grounds.

The 1970s saw an increase of protest action centered around Waitangi Day as a time to challenge the government on failures to uphold the Treaty.

In 1974 Prime Minister Norman Kirk changed the name of the day to New Zealand Day, an attempt to acknowledge the country’s multi-cultural identity, and possibly also to separate attention from the newly formed Waitangi Tribunal which would hear grievances against the Treaty. New Zealand Day was only commemorated in 1974, following Kirk’s death the day reverted back to Waitangi Day the following year.

The Waitangi Tribunal, founded in 1975, only met in 1977 before going into recess, although the near for it was becoming clearer with protests over land held at Bastion Point and Raglan during this decade.

Disputes of land and race relations continued into the 1980s. Security issues continued to plague the commemorations, including the requirement for police in riot gear in 1983.

In 1984, a hikoi (march) was organised to protest against celebrating the day.

In the following years the commemorations were much more low-key, although protests also continued. By the end of the decade, the Waitangi Tribunal had had its powers extended, allowing the investigate of claims dating back to 1840 and legislation had been introduced to require government agencies be more bicultural in their operations.

The 150th anniversary of the signing was commemorated in 1990, with the Queen in attendance. Protests continued, but were less disruptive than previous years. The format of commemorations continued to evolve, and tensions were again increased as the Government released new proposals for the settlement of Treaty claims in 1995 and the commemorations cancelled.

Official commemorations are held at Waitangi, although commemorations and events are now encouraged around the country. There is also a Fund which supports these events, which aims to celebrate the positive aspects of Waitangi Day – the coming together of the peoples of New Zealand in a Treaty partnership. It is also an opportunity to learn more about the Treaty and discuss issues.

Click on any book to go to the catalogue and check availability or place a hold (where applicable).